Welcome to Our Community

On 29, 1954, in the Marian Year, Mother Francis de Sales Cassidy, a native of Macon, and 9 Sisters of the Toledo Monastery, left to come to Atlanta to make the foundation of the Visitation Monastery, by the invitation of Archbishop Francis Edward Hyland. They purchased the former Candler home, and modeled it into a Monastery. The monks of the Monastery of our Lady of the Holy Spirit were great benefactors to the Community. The Sisters lived in that Monastery for 20 years. By then, the Sisters numbered eighteen, and in 1971, the Community purchased a 26 1/2 acre piece of land in Gwinnett County, on the outskirts of a small town called Snellville, with approximately 400 families. The Monastery was finished in 1974. As the land was a hay field, the Sisters named it Maryfield. The Sisters commuted frequently from the Atlanta Monastery to our new property to oversee the construction, to take care of the landscape, as well as vegetable gardens for the needs of the Community. The Sisters, all the while, were continuing to bake Altar Breads for the needs of the diocese. 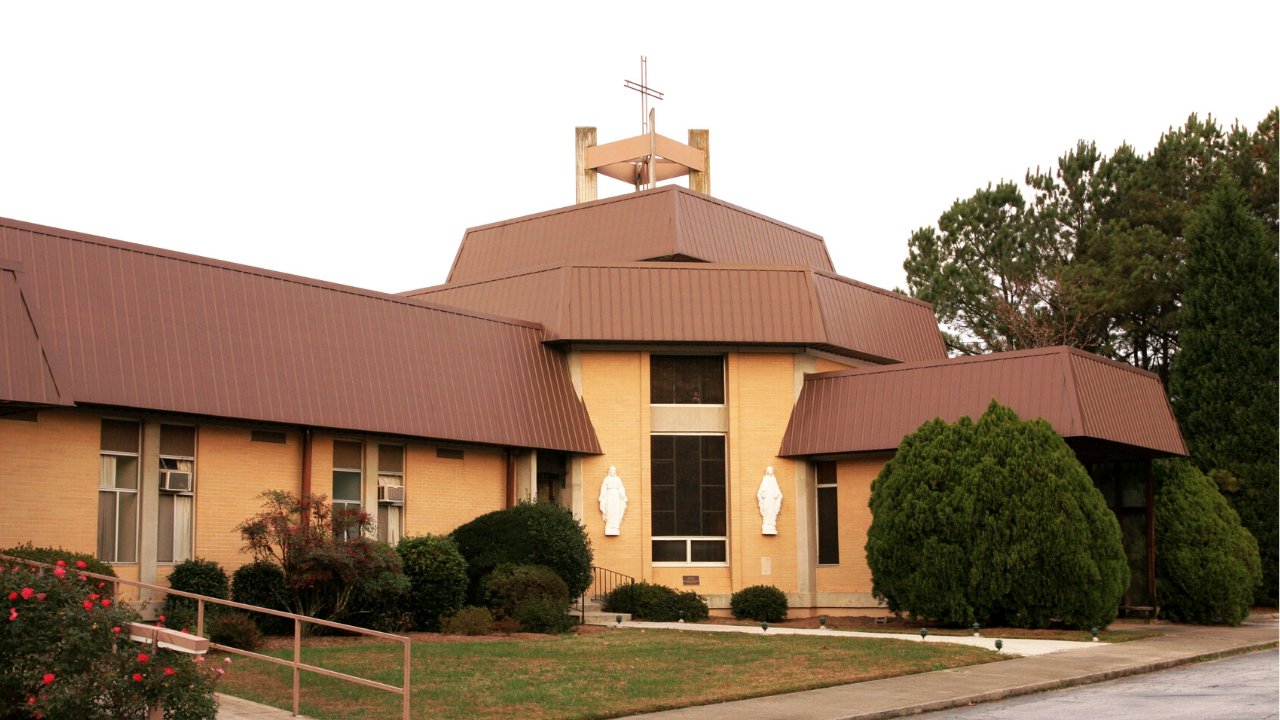 On October 7, 1974, Archbishop Thomas E. Donnelan blessed the Chapel and Monastery, installing Papal enclosure. The Sisters invited neighbors and friends to tour the new Monastery before enclosure was put in place. God provided us with many more benefactors.

The Sisters made many ceramic Nativity sets, as well as beautiful statues and vases. Many of our Sisters were very talented musically with the organ, guitar, zither, and autoharp, even a harmonica!

Sisters from many different countries of origin joined us, as our Community had always been international- from Cuba, Canada, Italy, Germany, the Philippines, Colombia South America, India, Vietnam, Puerto Rico, as well as Sisters from all over the US.

Through the years, many changes came to the building of the Monastery, as funds made it possible to build a complete Monastery. A Novitiate building was built in 1984; an additional wing with Chapter room, library, music room, art room, prayer room and new sewing room in 1990. The Chapel was redesigned putting the sanctuary where the front entrance had been, and giving the Sisters more space inside the enclosure. The simplicity of the Chapel is really the work of the Holy Spirit.

In 1995, we had the joy of accepting choir stalls that had been in Mary Ward’s Convent in London. Our Monastery of Stamullen, Ireland donated them to us free of charge, even as to shipping them. They are nearly 600 years old. We discovered they had been hand carved in Yorkshire, England with wood from trees that no longer exist there due to the war. There are over 180 flowers, no two alike, with 6 angels playing instruments (some of which we do not recognize), praying, or with a shield with a large S on it. The details are amazing. There are no nails in any of the stalls or kneelers!

Through the years, many Sisters came who had been very talented, with all kinds of work experience; some had been nurses, pharmacists, teachers, opera and concert singers, missionaries, accountants, librarians, beauticians, university professors, actresses on stage and TV, CPA’s, technicians, artists, insurance agents, workers for Delta airlines, housewives and mothers, and young women right out of high school. 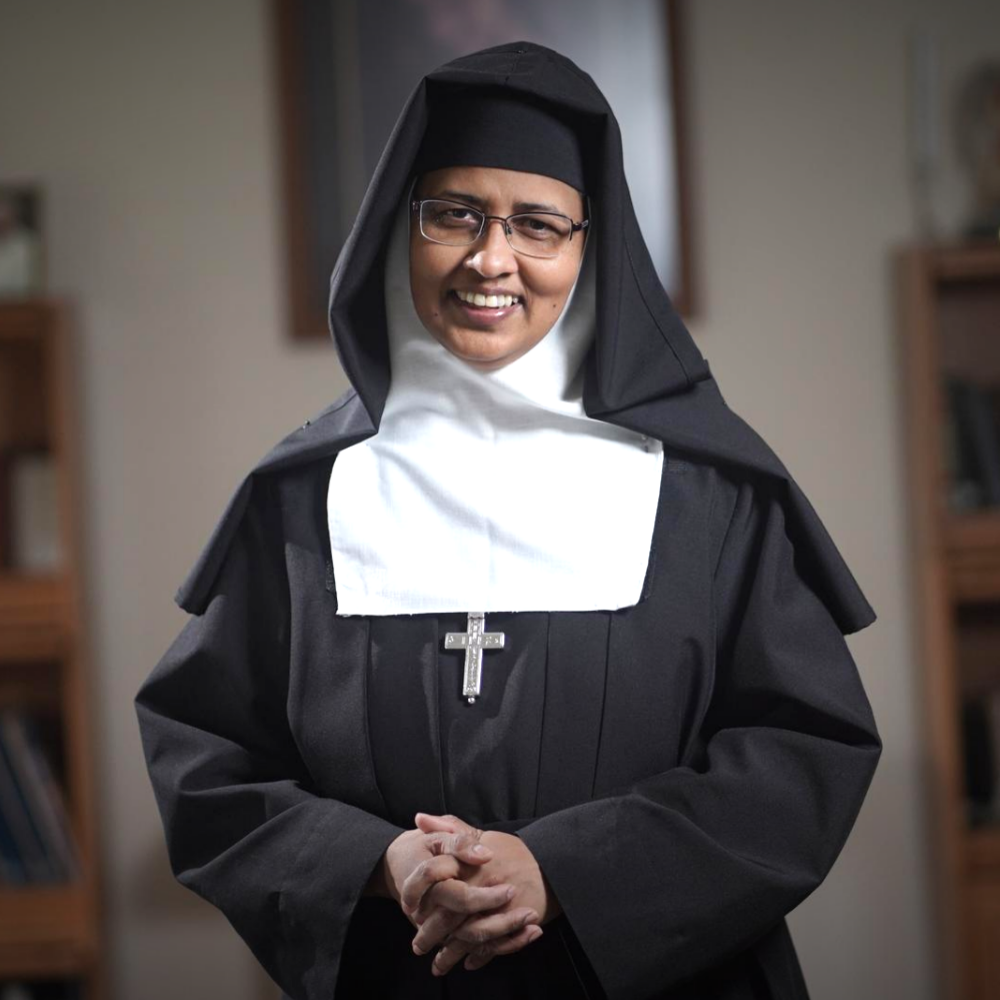 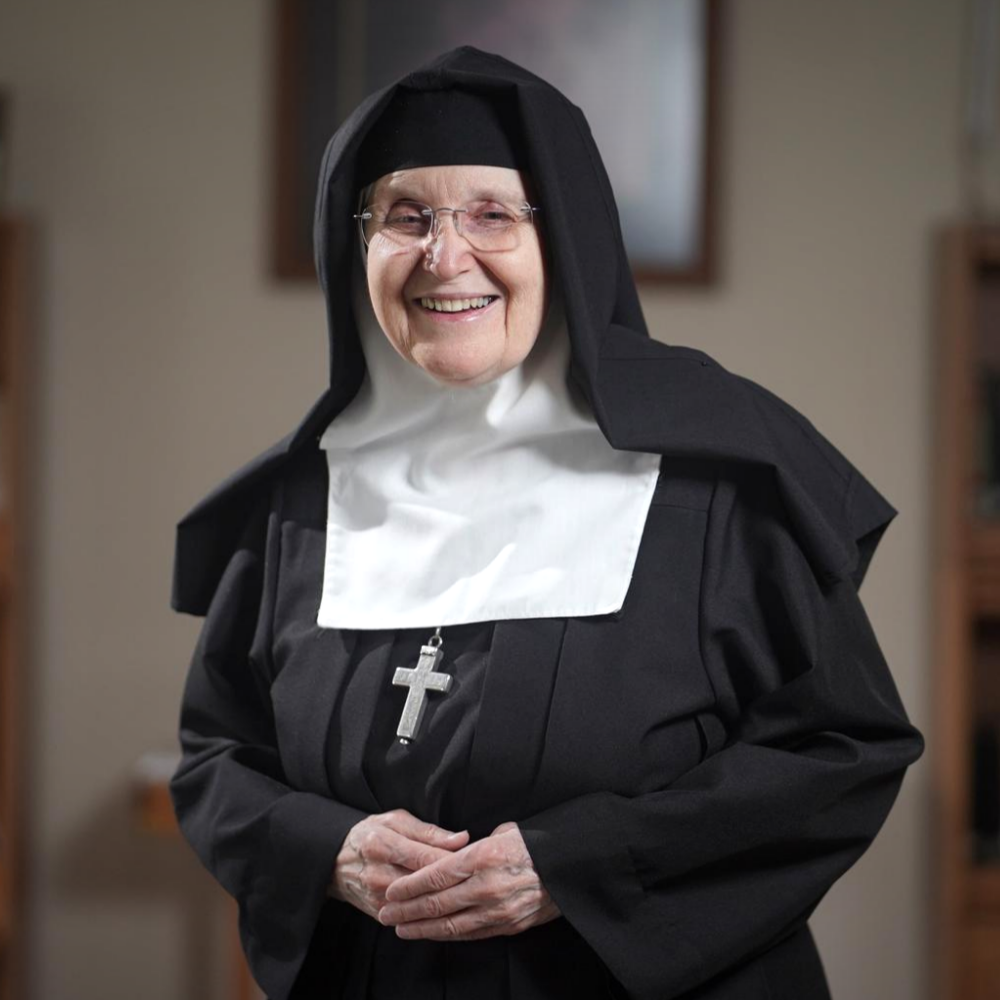 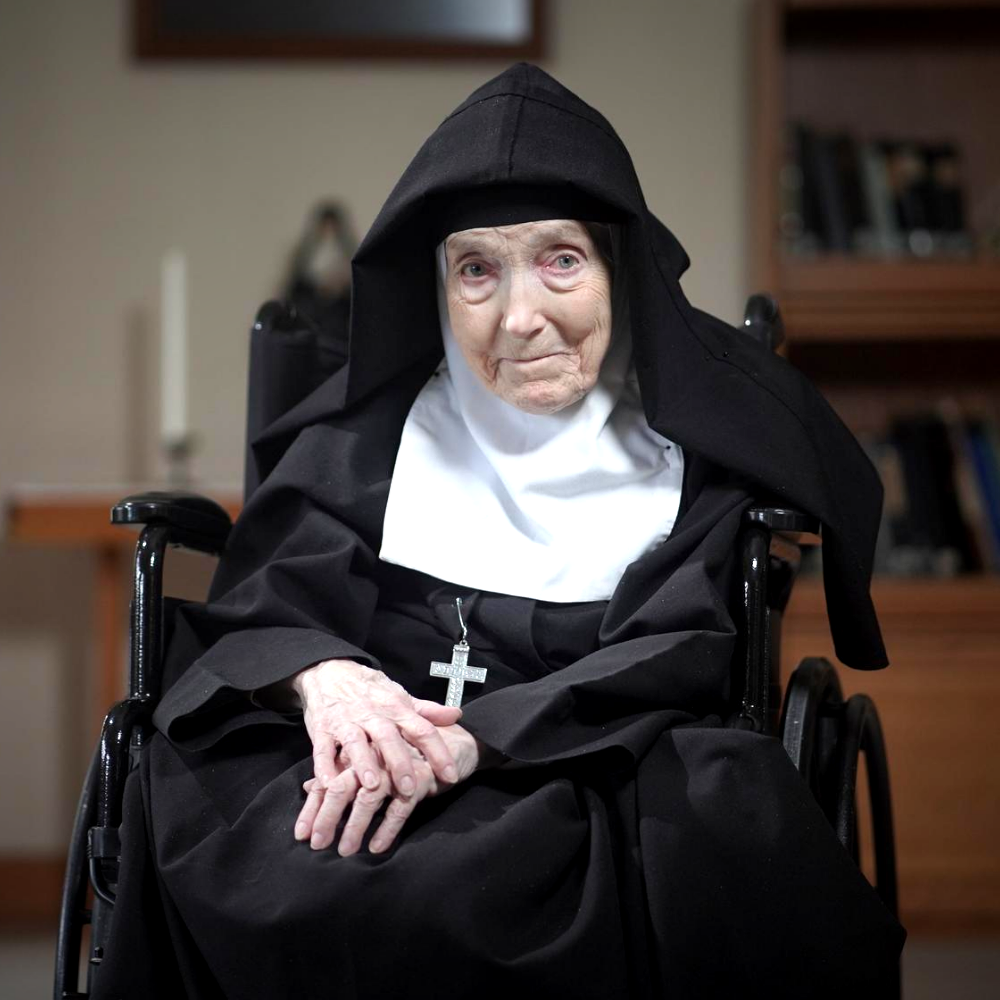 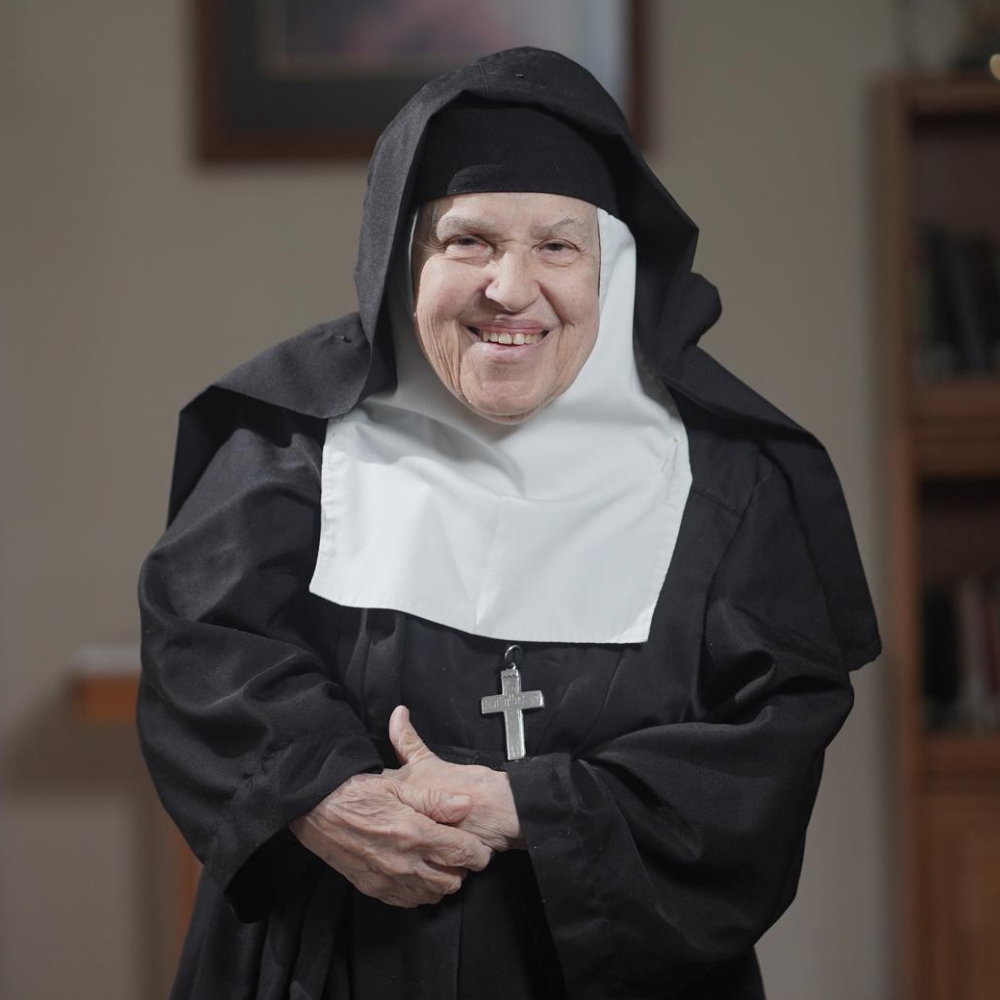 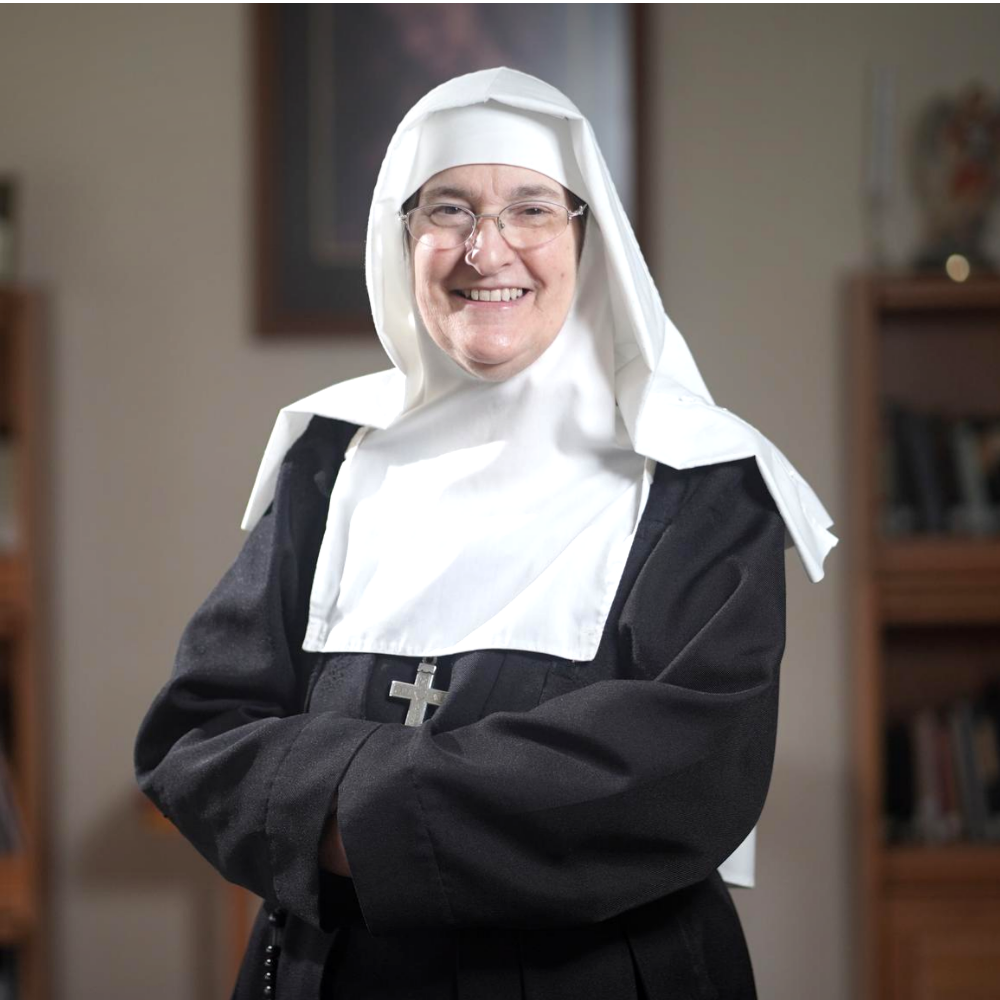 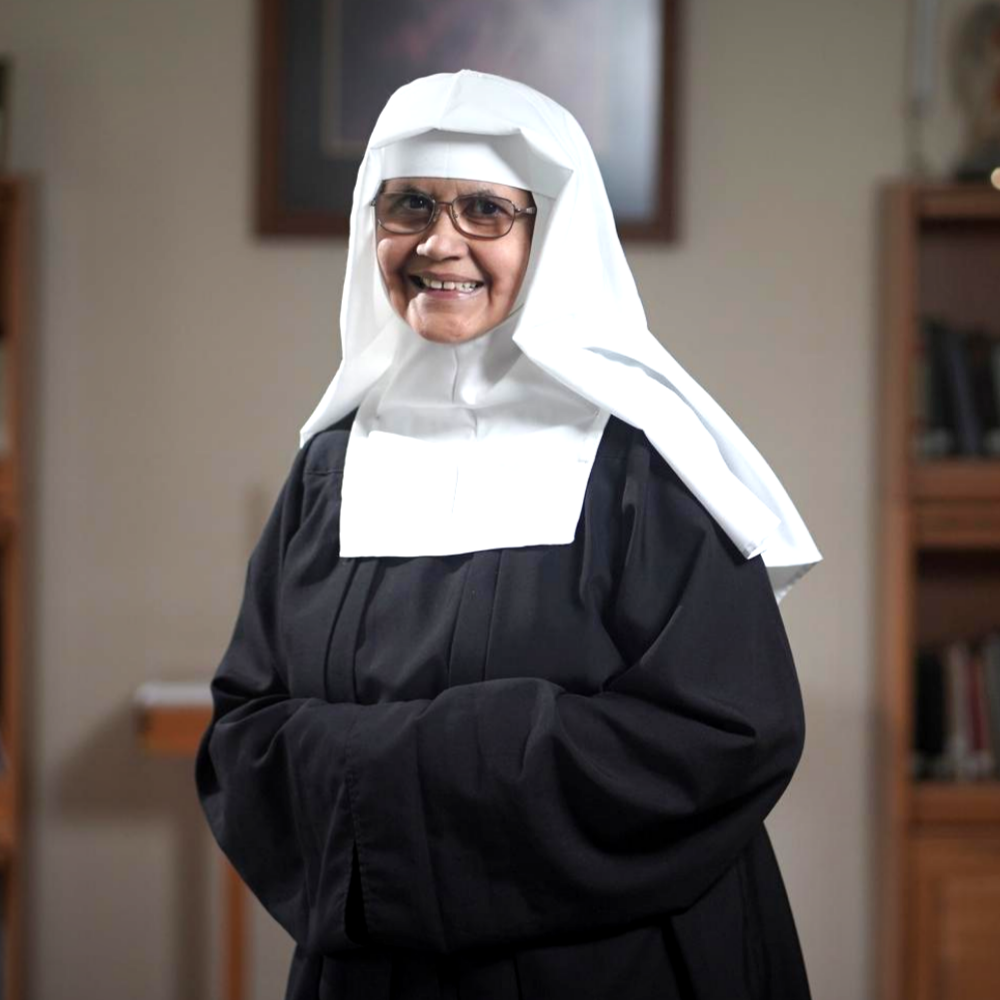 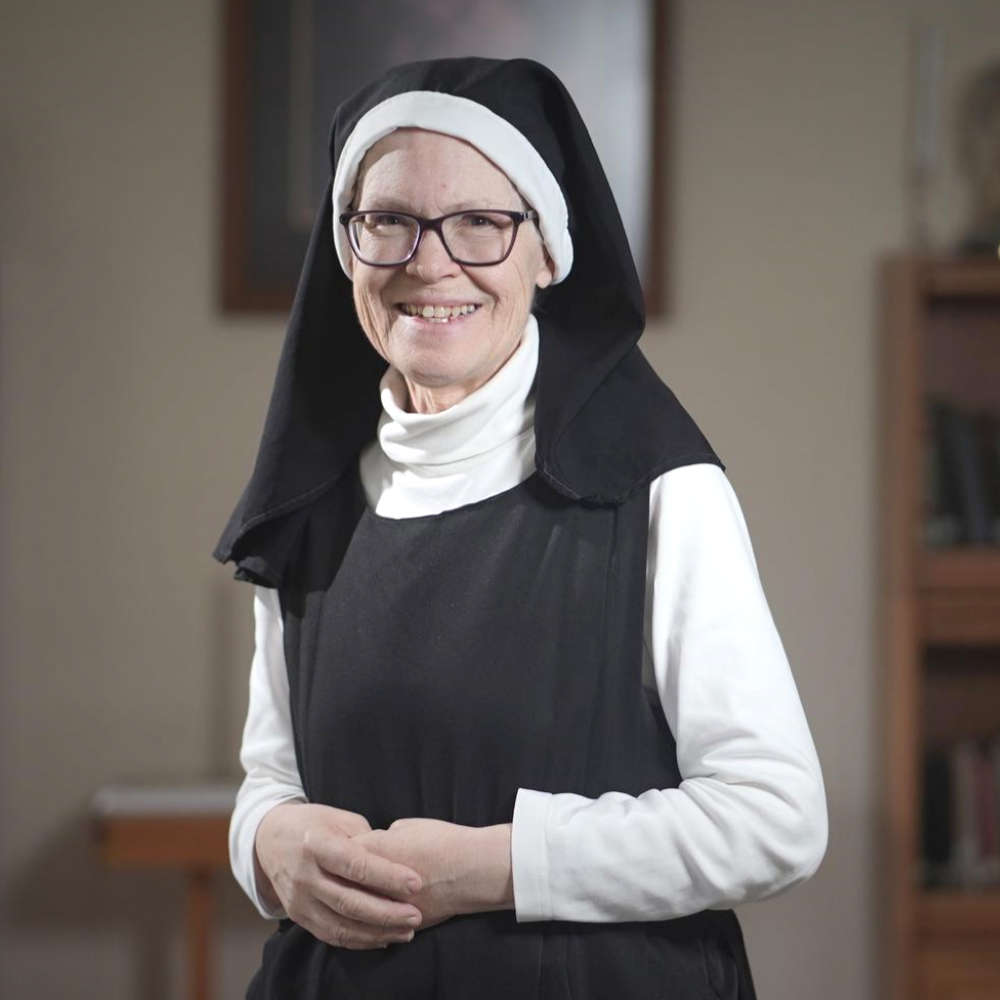 “Oh my dear daughters, you who call this Virgin your Mother, daughters of the Visitation of Our Lady, to imitate her virtues of humility and charity, the two great virtues which made her go out on her visitation” Essentially, the spirit of the Visitation is a spirit of love. He desired that a daughter of our Blessed Lady, she should belong to God, as she did, to accomplish all He wills.

A Desert experience Within the Cloister At present, we are offering retreats only for those interested in possibly joining our Community.  We have in the past offered retreats for women who wish to spend some days in the silence of the cloister, sharing our life of prayer, and experiencing the peace of being in a house of God – perhaps soon we may be able to resume doing so in the future.

Guard of Honor Meeting in our Monastery

On the 1st Sunday of each month, the members of the Guard of Honor of the Sacred Heart of Jesus, assemble with the Sisters, in our Monastery Chapel at 4:00 pm, followed by Holy Hour. Deacon Michael Mobley gives his reflections, leads the prayers, and concludes with Benediction. The intention of the Holy Hour is to console the wounded Heart of Jesus, by offering Him threefold homage of glory, love, and reparation.

It was founded by a Visitation Nun, Sister Mary of the Sacred Heart Bernaud of the Monastery in Bourg, France in 1863. With her great love of the Sacred Heart of Jesus, she wanted to find a way in which ordinary people could draw closer to Christ’s Heart in their daily activities. In this way, ordinary actions could be sanctified, and a gift of love made to the Heart of Christ.

Sister Linda is a Navy veteran and an RN.  She spent several years in a community of Discalced Carmelites.   She works in the Host Room, is our primary gardener, does most of the necessary sewing repairs as well as making habits, and helps with cooking and liturgy planning.

Sister Marianne worked in the mental health field immediately after college, then practiced law, and finally worked for nearly 20 years in a college library and managed the college archives.  She plays the organ for us, works as needed in the library and the computer room, helps with liturgy planning and writing material for the web, and enjoys doing needlework & crochet.

Sister Thiennga is originally from Vietnam, and wanted to enter a monastery there when she was an adolescent, but was told she was too young.  She came to the United States with her family, and has worked as an accountant.  She was delighted to find an Order that would accept older vocations.  She is assistant to the Sacristan, and works hard to keep our altar linens and vestments clean and freshly pressed.  She loves to draw pictures for children.

Sister Teresita is a novice who volunteered to help our Community from the Visitation of Tyringham.  She has been a great asset to the Community with her sewing and artistic abilities, making habits, veils, and Sacred Heart badges, and arranging flowers.

Sister Mary Grace assists in the Sacristy and also helps with Portress duties. Sister is an R.N in a hospital for many years in California. She is a very compassionate person, and a prayer warrior, with a huge sense of humor! Recreation is pure delight with her in attendance.

Sister Mary Peter comes from Long Island, New York, although she was born in Canada. Sister loves to help wherever she can. She was a beautician before her entrance into the Monastery. She says she was so gentle with her patrons that she put them to sleep while working on them! Sister has worked in the kitchen, Host Room, linen room, laundry, and taking care of the animals, as well as working on the grounds.

Sister Mary Regina has a doctorate in Moral Theology. She has taught at Fordham University and was also a missionary in Liberia before she entered the Monastery. She used to mow the whole land on a tractor, and has worked in woodcraft at the Monastery, such as making Christmas Stables,( one of which is used in our Chapel at Christmas), as well as tables, benches, etc. Sister did everything to perfection, with simple beauty.

Sister Mary Jane Frances is from Tulsa, Oklahoma. She was an R.N., in cardiac critical care, as well as Neonatal unit.Sister was married to an Infantry army colonel. She and her husband had nine children (they wanted twelve). Her college experience and professionalism was in musical voice training and in classical voice, having sung opera arias (she was Carmen in the opera of that name), and has done some acting with her husband. She also raised dogs, and has a great love of them. She was Superior for nine years.   Sister is very blessed to have a grandson who is studying in seminary to be a Priest, and a granddaughter who is a Temporary Professed religious Sister in Nebraska.

Sister Josefa Maria has been in the Monastery for over 50 years, having entered the Monastery in 1968 – she celebrated the Golden Jubilee of her Profession in August, 2020. Sister is Assistant Superior to Mother Teresa Maria, and is also Mistress of Novices. Sister used to have a large garden, and has done a lot of art work. She supervises the Altar Bread department, and loves to make rosaries, plays the guitar and the zither.

Mother Teresa Maria Kulangara is the Superior of the Monastery at Maryfield. She succeeded Mother Mary Jane Frances Williams,who served in that capacity for nine years. Mother Teresa Maria is a native of Kerala, India. She is a Pharmacist with experience working in hospital as well as retail. Mother Teresa Maria first entered the monastery as a postulant for nearly a year in 2000, but left to further discern her calling. She reentered in 2005 and professed her final vows on August 7, 2011. Mother Teresa is a very kind and gentle person, always joyful in her vocation. When she was elected Superior, she remarked that if she had known that she would ever be Superior, she would never have chosen the name Teresa, because everyone would expect so much, since Mother Teresa of Calcutta is so well known and loved! But of course, we do!